Commissioned by the government, Arcep and Ademe presented their version of the environmental impact of digital technology. Hardware is the least environmentally friendly, followed by data centers and networking based on the entire life cycle.

It is a rigorous exercise taken by Ademe and Arcep to assess the environmental impact of digital technology. We recall recent criticisms regarding the implementation of the fixed and mobile data CO2 index on invoices and the methodology chosen. In their study, the two organizations relied on a life-cycle analysis methodology (multi-criteria (11 environmental indicators), multi-stage (manufacture, distribution, use, recycling) and multi-component).

Before drawing lessons from this method, Arcep and Ademe start from a more general observation of the ecological footprint of digital services in France. Regarding their electricity consumption, for example (48.7 TWh), they represented 10% of the total consumption. In terms of CO2 emissions, it shows a score of 16.9 million tons of carbon equivalent and will contribute up to 2.5% of France’s total carbon footprint. Finally, these services generated 20 million tons of waste annually over the entire life cycle of the equipment.

The stations that are primarily responsible for the environmental impacts

On this last point, the primary responsible for the majority of the effects is the “user” and IoT terminals (between 64 and 92% depending on the device). Among them, the TV screen is a pet’s wrath, especially because of the large number of materials and equipment required for its manufacture. The list also includes laptops, tablets and smartphones, with the same issue related to the manufacture and end of life of peripherals.

Among the three studied parts, the effect of the stations is well shown. (Image credit: Ademe/Arcep)

On the Internet of Things, an extrapolation work was carried out to find out the number of connected objects in circulation in France. This number comes to nearly 245 million in 2020. The report concludes that energy consumption is relatively low, but the size of the devices has a significant environmental impact. Regarding stations, the network issue ranked third in the study. I found that the fixed network (xDSL and FTTx) is the most impactful compared to the mobile network (2G, 3G, 4G, 5G). In fact, the former consumes more electricity at the stage of use, and requires more equipment, especially because of the boxes installed on the users.

In second place: data centers. But here again the effects vary according to the specific type of data center. So group hosting centers have a strong influence (35 to 50%) compared to those companies (30 to 40%). The local and local portion contribute less (5-15% of the effects) and HPC supercomputers (between 0.1 and 5%). The numbers need to be put into perspective, because as the report states, “the difficulty of accessing the data requires the use of rough estimates that present a limitation in the accuracy of EIA results for a data center park.” Refers to information and documentation of internal (public or private) data centers that are rarely published. 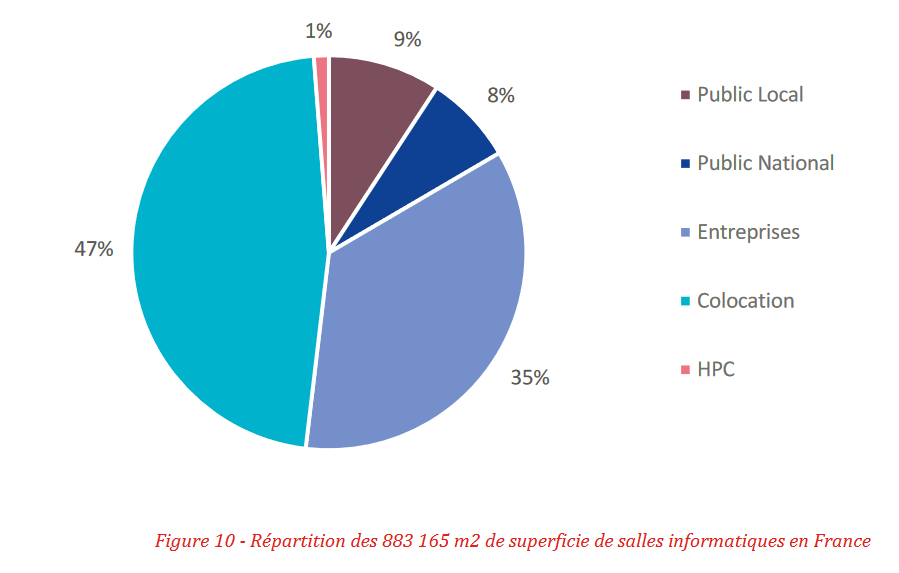 Based on various studies and analyzes, the study indicates that the area of ​​computer rooms in France is 883,165 square meters. All have a PUE of 1.69 (with differences of 1.93 for public and companies, 1.55 for subscriber and 1.17 for HPC) and electricity consumption of 11.59 TWh, which is 2.4% of the national electricity consumption. It should be noted that the data is for 2020 and that since then many data centers have appeared, especially for pure players with improved cooling systems and heat redistribution for the benefit of society (urban heating for example).

Ways to think to reduce impact

Faced with the different findings of the study, Ademe and Arcep note that the manufacturing stage is the main source of the impact (78% of the carbon footprint), followed by the use stage (21% of the carbon footprint). On this last point, it is possible to reduce this impact by focusing on policies aimed at extending the useful life of digital equipment through product durability, reuse, refurbishment, job savings or repair.

In addition, the two organizations are campaigning for methodology improvement. So they ask for more data (often blocked in the name of business secrecy) to improve their analysis. They plan to publish a futuristic analysis next April of the impacts of digital technology in 2030 and 2050 based on 4 scenarios. The date is set…