A high-quality portable device necessarily more than 1000 euros? Don’t laugh at Honor with the MagicBook 14 2022 that relies on Ryzen 5 to deliver on its promise.

Premium laptops are no longer the most premium devices on the laptop side. Not because they have nothing left, far from it, but because their greatest features can now be found on computers well below the 1000 euro mark. How ? By making the right choices and finding the right balance, as always in the IT world. With the MagicBook 14 2022, the Chinese manufacturer Honor presents a super device that should not be shy about facing premium competitors such as Dell or HP, and does so thanks to the relevant options.

The first impression of the first “sacrifice”: Honor MagicBook 14 is heavier than most ultra-thin notebooks over 1000 euros. At 1.34kg on the scale, it’s simply the weight offered by the first computers in this class. Today, we’ve gone down or dealt with the kilogram bar, but that weight is far from restricted. Especially considering the price of the device.

The range’s excellent bases are still there, notably its aluminum frame and 180-degree hinge. If the “spatial” dark gray isn’t the most authentic in the world, the Honor MagicBook 14 allows itself to be a little original with lines that reflect light in the same way as the Honor logo. This feature is especially interesting, because sometimes it gives the impression that the casing is surrounded by LEDs, as if the computer was always on and in the room. The effect I particularly like, I must admit.

At this point, the Chinese manufacturer made no sacrifice. It is perfect! The keyboard takes up almost all of the space on the chassis, resulting in a full layout that is very spaced out and a pleasure to hold. However… the keys don’t have a lot of travel and are very light. feature? the speed. defect? Accuracy. Some will be incredibly comfortable on this keyboard, others will blame it for the lack of tactile feedback. So the balance is between spacing and light and muted switches, which is a fairly logical balance.

The touchpad isn’t disappointing, but it doesn’t make it to the top of the range due to its plastic coating. Its very rectangular format will need some getting used to if you use lateral and not vertical gestures regularly, but it’s only temporary. In absolute terms, it is one of the “good” touchpads.

Note that the start button includes a fingerprint reader, allowing you to use Windows Hello.

On the left is a USB-C port, a USB A 3.2 Gen 1 port, and a full-size HDMI port. On the right, the USB A 2.0 port and combo jack port. One USB C port seems to be a bit limited in 2022, especially when you see all the wasted space on the right side of the device that’s worth accommodating another port.

The connection is good, but nothing more than that. Most surprising is the continued existence of a USB 2.0 port, when 3.2 is widespread today.

What a surprise. Honor continues and signs on to put the webcam on the keyboard. Its great advantage is its ability to physically block it, so that the paranoia of the watch can be assured at all times. But as always, the problem is that the angle is far from flattering. Unless you want to get a close-up of your Bedouin, the computer is resting on your legs. 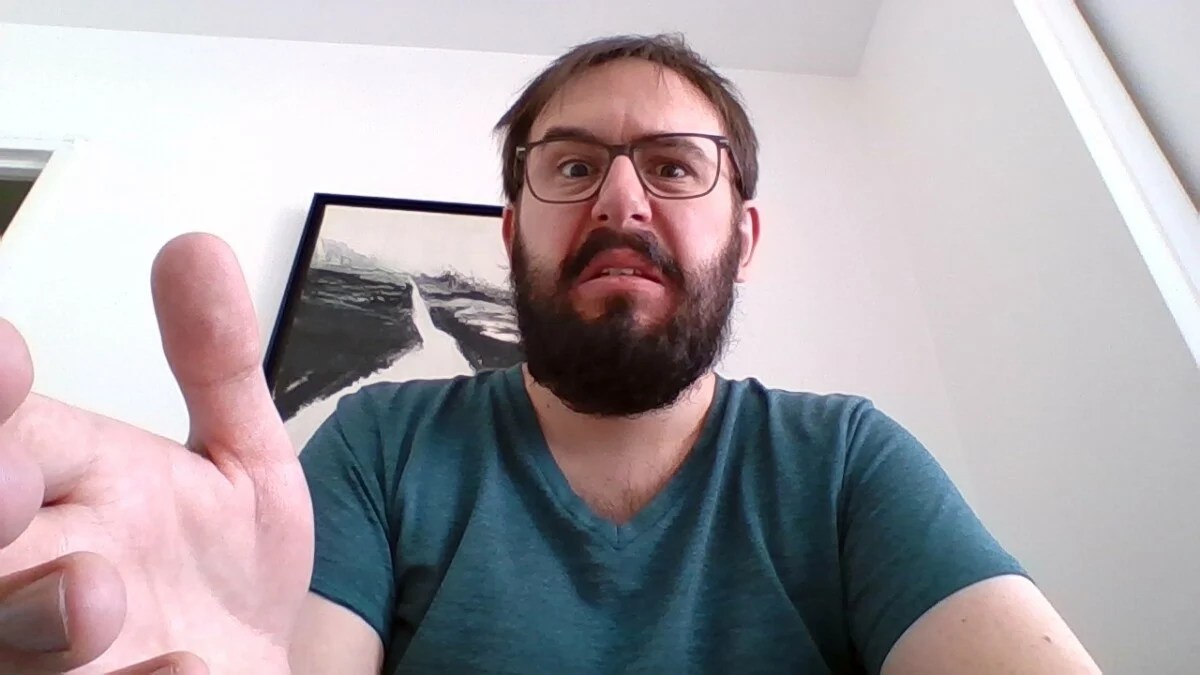 Especially since the webcam is always the same…bof. Volume level, this is also a song you all know by heart: bass is absent, mids are not well defined, only the notes come out well. Placing the speakers at the bottom of the device means they are instantly blocked by your legs. Understand: This is common for computers in this class. So we won’t hold it against the Honor MagicBook 14, except to emphasize that it doesn’t stand out.

The Honor MagicBook 14 still has a 13.3-inch IPS LCD panel with a 16:9 ratio. This isn’t touchable, but it has a clean coating to prevent reflections.

Under our examination and with DisplayCal software, we can see that the manufacturer is delivering on its promises… which weren’t very high. 325 cd/m² of maximum brightness is correct, but it will not allow for excellent reading in direct sunlight. Contrast is very good at 1227:1, without being among the best. It covers 92.3% of sRGB space, 63.8% of Adobe RGB and 65.4% of DCI P3, again in line with what was expected. And the average color temperature at 6350K brings it closer to the video standard at 6500K. 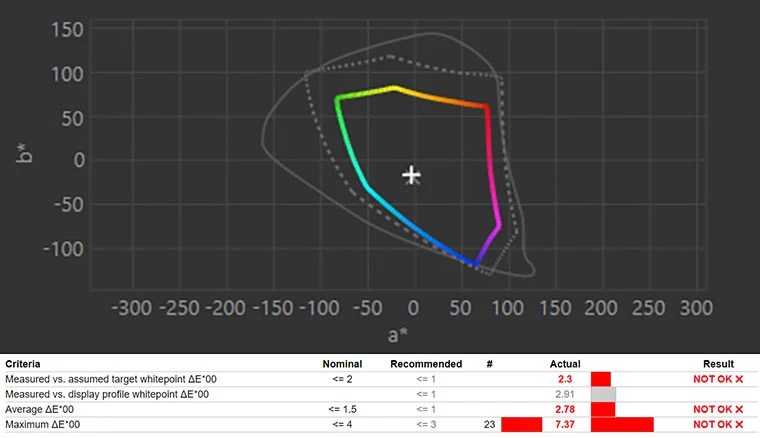 Visually and in use, the screen is really only disappointed by its lack of brightness. But if you plan on using your computer mostly indoors, you won’t really notice. Again, this is an acceptable compromise.

Windows 11, but with a small and important addition from Honor: its PC manager, which enables in-depth collaboration between computers and Honor smartphones. In particular, you can find clipboard sharing, documents or notifications, as well as some handy calculator shortcuts, for example. 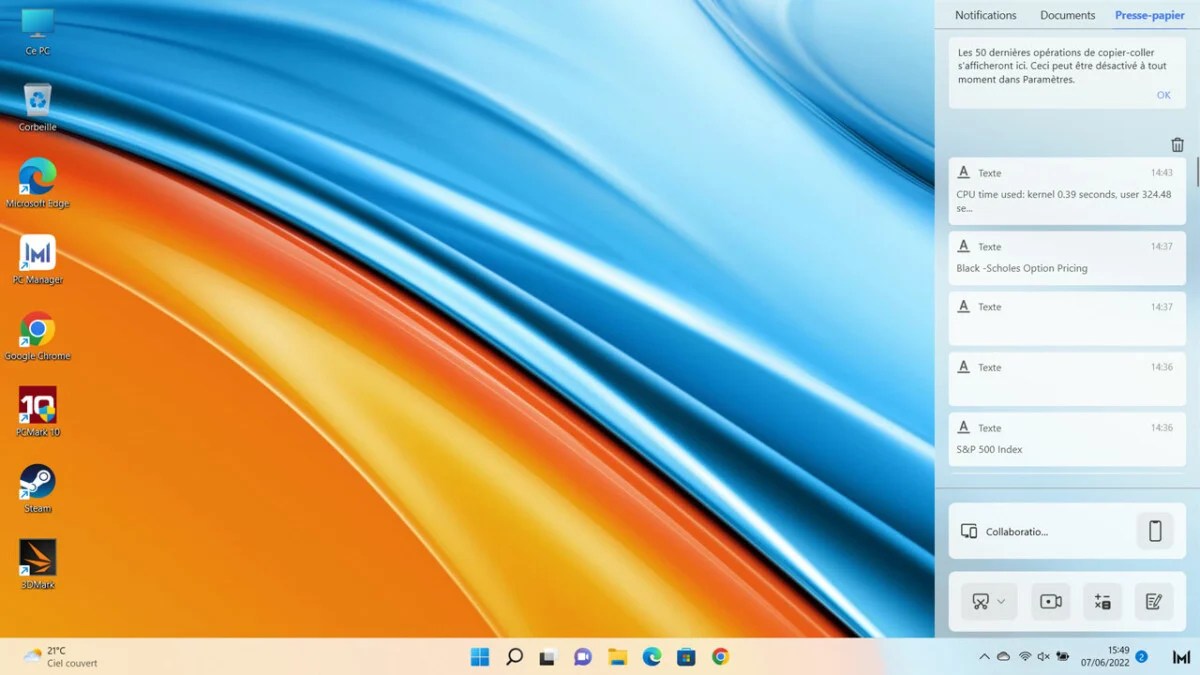 The solution is nice, but I couldn’t find anywhere for it in my country workflow. Then it remains code that I personally find very ugly and ugly, which can obviously be deleted. Honor users will find their account there, while others will uninstall quickly. 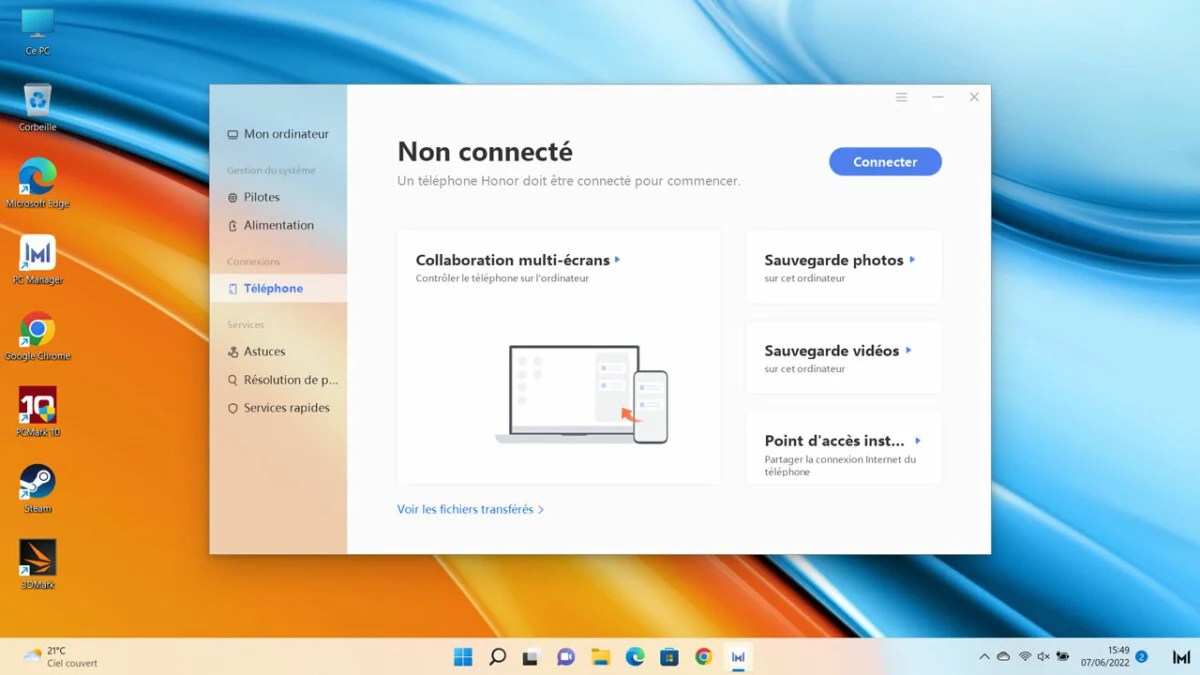 In this configuration, the Honor MagicBook 14 takes advantage of the AMD Ryzen 5 5500U with 6 cores and 12 threadsWith a base frequency of 2.1 GHz it can increase to 4 GHz. The latter includes a Radeon Vega 7 GPU part. It’s paired with 8GB of LPDDR4 RAM and 256GB of NVMe PCIe 3.0 storage.

The fun fact about the new MagicBook is that it can be very easily compared to the 2011 model, given that it features the 11th generation competing Intel chip. And it gives us exactly the results we expected on the Cinebench R23: at 1,175 points in single-core and 6,414 in multi-core, it’s further evidence that Ryzen processors are less good single-core than Intel, but much better at multi-core.

Ultimately, performance will be similar, as indicated by our PC Mark 10 score of 5,068, which puts it in the same league as the 2011 MagicBook 14 at 5130. The same is true for the Vega 7 GPU, which will power your games free to play Standard at 60fps without worry, but won’t go beyond that. On the SSD side, we find the performance expected from a mid-range PCI Gen 3. 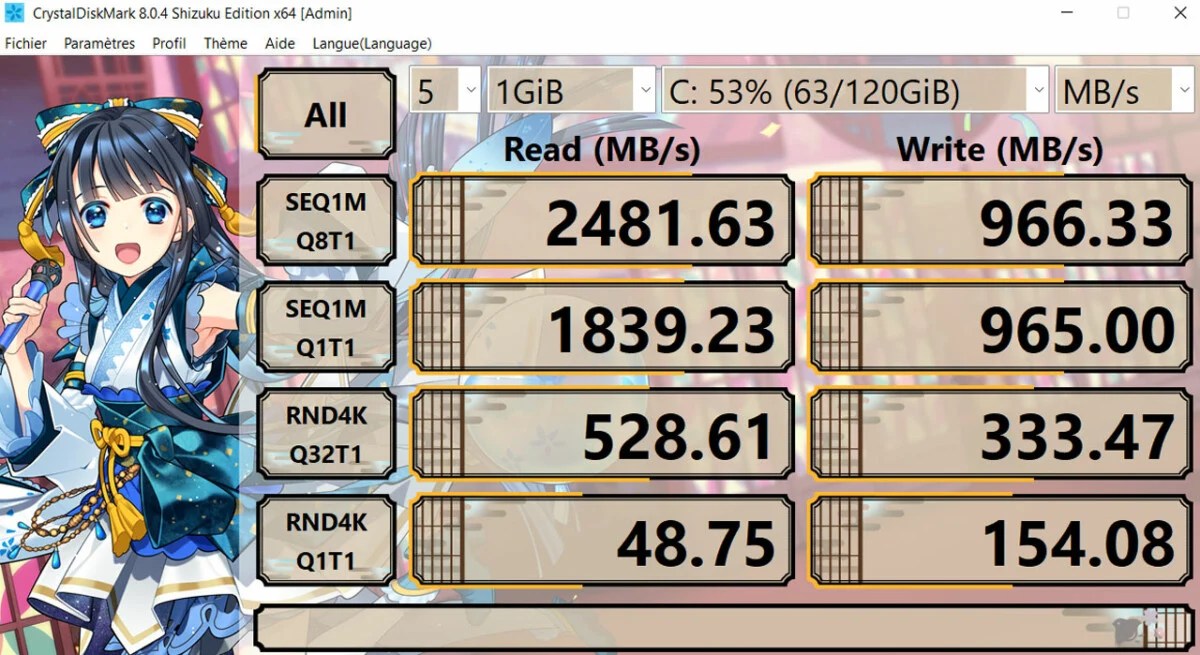 What do we remember? The 2022 model offers pretty much the same performance as the 2021 model, but at a much lower price. This is the important thing.

Honor MagicBook 14 fans rarely hear during normal use. Once the computer is pushed a bit to its limits, it’s already audible, but it’s far from annoying. On the heating side, we end up with a maximum outside temperature of around 42°C, which is very true for a computer of this class. Moreover, the temperature is far from hampering use.

Honor MagicBook 14 includes a 56Whr battery. It is recharged via a USB-C port, using the PowerDelivery standard which allows the use of many different power sources.

In the PCMark 10 autonomy test, the Honor MagicBook 14 (2022) gave up ghosting after 13 hours and 18 minutes, from 99 to 2%. It is simply the autonomy that we are entitled to expect in a high-speed hauler in 2022, which we find especially on products optimized for this purpose and at the top of the basket. Therefore, Honor MagicBook 14 (2022) does not disappoint at all on this point.

Honor MagicBook 14 is available in our test configuration at the official price of €749.90. This however is regularly promoted at a price of 649.90 euros.